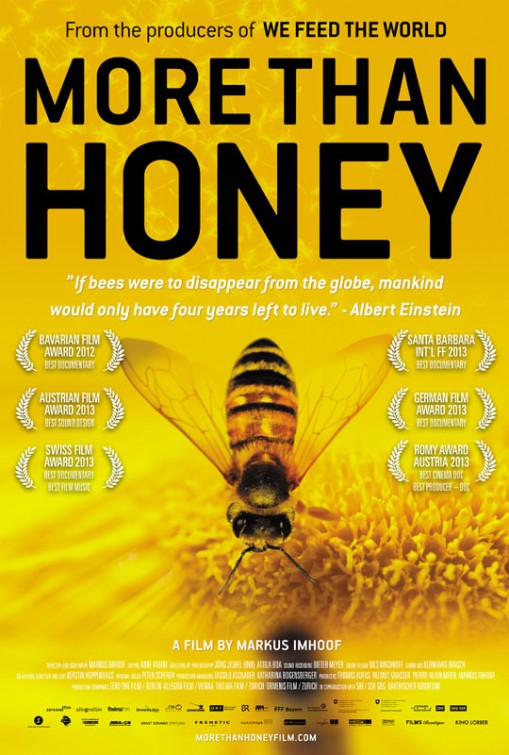 The Naro Cinema, located at 1507 Colley Avenue in Norfolk VA, will once again screen a film calling attention to the plight of the world's honey bees. Please join us on Wednesday, August 28th at 7:15 PM for More Than Honey. Guild members Dan Margolies and Pam Fisher will facilitate the post-film discussion.

Academy Award-nominated director Markus Imhoof (The Boat Is Full), whose family has kept honey bees for three generations, travels the globe investigating the mystery of bees dying off in large numbers. Bees pollinate most flowering plants, so more than honey is at risk. Without bees, it is estimated that a third of the world's food would not exist - so their threatened extinction is a big threat to humanity also. Imhoof interviews beekeepers, farmers and scientists, traveling from Switzerland to California (where truckloads of bees for hire are driven long distances from crop to crop), to China (where human workers clumsily hand-pollinate each flower after bees have been killed off by pesticides), to Australia (where like the US, honey bees did not exist until imported by European settlers). Surprising up-close camerawork reveals the complex society and collective intelligence at work inside the hive; unprecedented close-ups of bees in flight are beautiful and eye-opening. More Than Honey is a fascinating, amazing and vital film. (96 mins)

"[A] marvelous bee-centric documentary ...a delightful, informative,and suitably contemplative study of the bee world and the bee-population crisis"
- Stephanie Zacharek, The Village Voice

"It's a vibrantly absorbing trove of information, revealing things like the "Waggle Dance," discovered by Nobel Prize winner Karl von Frisch, the ingenious figure-eight movement bees perform to impart information about the directions and distance to vegetative sources of pollen and water and also housing locations." - David Noh, Film Journal

"Makes a convincing argument for the role of bees sustaining both organic and industrial concerns...(an) effective melding of science and aesthetic delights." - Eric Kohn, Indiewire